Rencontres Littéraires :
A series of informal literary conversations at the Institut français d’Ecosse

While in English there is only one phrase for cultural heritage, in French the term ‘matrimoine’ has been supplanted by ‘patrimoine’. In reaction to the masculinist tradition that has shaped France’s cultural heritage, the term matrimoine has recently been revived by Aurore Evain, and since then encouraged many cultural initiatives throughout France celebrating women’s contributions to French history. Indeed, to speak about « Matrimoine » is to value the image of the women who have built our History and contributed to our cultural heritage.

Stage producer and scholar Aurore Evain will analyse the case of the first actresses and female playwrights in order to reflect on the implications of what it means linguistically and culturally to speak about and ensure the visibility of women’s cultural heritage.

This event is organized in collaboration with the University of Edinburgh, School of Literatures, Languages and Cultures, as part of Dr Séverine Genieys-Kirk’s series of public events, Learning to see the power of women: cultural encounters between past and present. 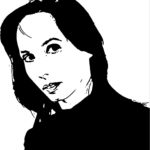